Once known locally as “The Potato People” for the 30 varieties of potatoes they would bring to River Market every week, Sue and Rusty Nuffer are more widely known as the first organic farmers in Arkansas. I have never met anyone who didn’t have a kind word to say about this farming duo, and have never tasted more delicious greens! 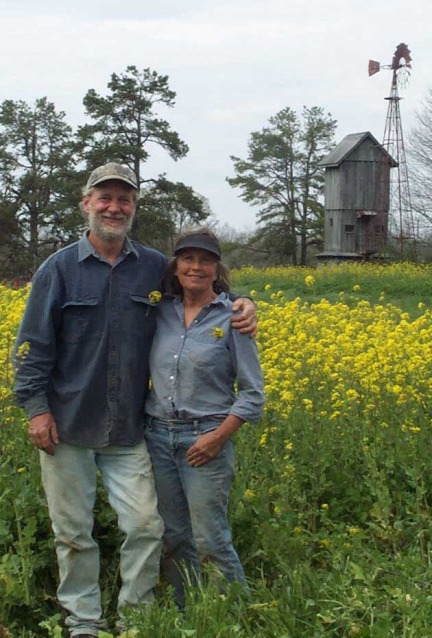 How did you get into farming?

Sue & Rusty: Rusty bought Armstead Mtn. Farm in 1972 with his first wife Nancy and a group of friends from Ann Arbor, Michigan. They were determined to be self-sufficient horse-powered organic farmers that lived off the land. This communal effort lasted several years before the reality of life in the Ozarks and the work involved drove off most people. By 1976, it was down to just Rusty and Nancy and their first daughter. A son and another daughter would follow. The farm’s first business involved the purchase of a registered Suffolk Punch stallion and 5 registered mares. Along with the draft horse foals, the first crops grown for the developing organic market were sweet potatoes and Irish potatoes. Sue and her first husband Brian arrived in 1975 with a son and daughter. They bought Hatley Mtn. Farm (about 4 miles from Armstead) with the intention of growing organic blueberries. Their 2 acres of blueberries was one of the first organic plantings in Arkansas and their marketing expertise opened up the organic market for products from both farms. Both farms joined the Ozark Organic Growers Association (OOGA) in the late 80’s and cooperatively marketed their produce to the early organic wholesale market with about 20 other growers scattered across the  Ozarks.  This lasted about 10 years with Sue being Market Manager for 3 of those years. What put an end to OOGA was a bunch of California growers seeing the potential of the growing organic market  decided to convert to organic and sell below cost to drive out all the small growers. It worked! During this time there were changes on the mountain too and Sue and Rusty were now a couple and combined their farms. In 1997 they had an unsold  potato crop and decided to try out selling at the River Market. Known as the “Potato People” at first, they grew as many as 28 varieties one year. Soon they spread out to grow many varieties of vegetables, taking an average of 30 varieties to the market a week.

When did you start getting involved with ALFN? (formally known as the Arkansas Sustainability Network)

Sue & Rusty: After 10 years at the market, getting up at 2:00am and driving 90 miles to L.R., we were wearing out. The River Market was a joy to do because of all our wonderful  customers and if we were closer we’d still be involved. We had met a lot of chefs at the market and we told our customers that we were going to try to sell just to restaurants and wouldn’t be there next year. A few of our customers asked if they could buy in bulk and divide it between themselves. Of course we said yes and the food program of Arkansas Sustainability Network (ASN) was born. We were the only farm involved at first. 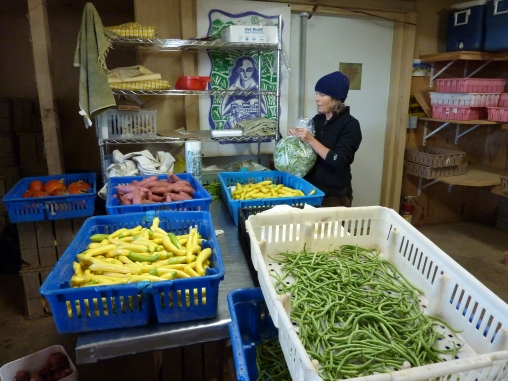 What was it like being involved with ALFN early on?

Sue & Rusty: Thinking back, the most amusing and heartwarming experience in the early days of ASN was it’s humble beginnings The pickup location was a bike shop that repaired old and used bikes to resell or donate. ASN was allowed a large room for the Saturday produce distribution. We would bring a truck load of coolers and totes with blue ice in them and cover with blankets to keep them cool. No refrigerators then! The none refrigerated product such as potatoes would be in 50 pound boxes. The volunteers did the rest of the work of dividing our bulk delivery. A shout out goes to the early leaders of ASN, Katy Elliot and Nao Ueda for their vision and organizational skills and to all the volunteers. Compared to the efficiency of today’s ALFN with it’s great Locallygrown computer program, refrigerator and freezer space, ASN’s beginning was bare bones simplicity but it worked.

Which of your products would you recommend to new customers?

Sue & Rusty: We have always grown our produce as if we were growing it for ourselves to eat. We are USDA Certified Organic and have always followed organic standards. Our broccoli is available now and we will soon have our delicious carrots and beets. (editor’s note: I highly highly recommend any of their greens! They stay good for weeks and are bursting with flavor).